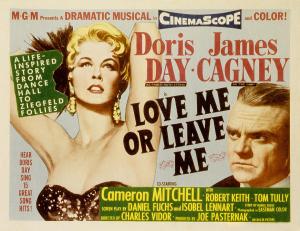 What do you get when you combine the sunny Doris Day with gangster James Cagney? Love Me or Leave Me, a sensational grangster/drama/musical and one of my favorite films of all time.

Love Me or Leave Me is a loose biopic of singer Ruth Etting, who was famous in the 1920s, but whose career in Hollywood was ended when her gangster husband, Moe Snyder, shot her lover in the mid-1930s (the lover survived and they were later wed). The film explores not only her career, but her relationship with her husband.

Ruth Etting (Doris Day) is a would-be singer working at a dance hall, until she gets fired for kicking an over-familiar customer. This catches the eye of Marty “The Gimp” Snyder, a Chicago gangster (James Cagney) with a limp. He tries a pick-up line, but she rebuffs him, until he offers to help get her another job. This starts a whole cat-and mouse process, with Marty trying to get her obligated to him and Ruth trying to hold out, but still take advantage of his help at the same time. She’s ambitious, but Marty initially thinks if he can just humor her, eventually she’ll be satisfied and go away with him.

But pianist Johnny Alderman (Cameron Mitchell) is also interested in Ruth, but wants to help her career honestly, without using any of the questionable methods of Marty. But Ruth is ambitious. Because she’s played by Doris Day, it is easy to overlook just how ambitious she is, but she is leaving nothing to chance and wants to use Marty to help her career and she’s not ignorant of his strong-arm methods for doing so. But as Johnny warns Ruth, she’s playing with fire and she can’t just use Marty and then leave him. She doesn’t listen and winds up in an abusive marriage with Marty.

Doris Day and James Cagney are magnificent in this film. They are two dynamic, incredible actors and the screen lights up whenever they share it. Doris Day is never overwhelmed by him, but actually is his match in both presence and personality as the two of them battle back and forth. Both actors admired each other; Cagney thought Day was an instinctive actor like himself and even lobbied to have her cast in the film and be given top billing (remarkable generosity). Nothing, I believe, demonstrates her abilities better than this film and how she manages to hold her own with James Cagney. I’m not sure I can think of an actress who does it better.

Doris Day is still seemingly herself, but with an edge. By the second half of the film, after she has achieved stardom, she is bitter and deeply unhappy, but still with that Doris Day resilience and willingness to bounce back, though perhaps not quite with the same enthusiasm that Ruth had when her career was first beginning.

Love Me or Leave Me also has one of my favorite James Cagney performances (along with White Heat and Yankee Doodle Dandy). He’s baffled and angry, full of lust and lovelorn at the same time, but he never lets you forget that he’s capable of dangerous violence.

And initially he doesn’t have a clue what he has in her, singing-wise. When he packs the club with people to hear her sing, he’s looking around nervously while the audience sits rapt during her song. There is another wonderful moment when Ruth makes her Ziegfeld debut. You can see it on his face: wonderment, anxiety, as he realizes how far she’s come and that she technically no longer needs his help, but also like he’s finally comprehending the full extent of her talent.

The more I see the film, the more sorry I feel for him (up to a point) in the first half, until he wipes away all sympathy by his actions. By the second half, Ruth becomes primarily a victim, but initially she is just as complicit as Marty and even strings him along, trying to have all the benefits of being a mistress without having to pay the price. I’m no longer sure  how much she is genuinely standing up for herself and how much is manipulation. When she is angry that he expects sex in return for getting her a job, does she really intend to walk out or is she hoping that he’ll give in? Maybe both.

I used to wonder how on earth she could have married Marty after he (it’s implied) finally gets fed up and rapes her. I finally concluded that the problem is that she both has too many scruples and not enough. She doesn’t have enough to prevent her from trying to use Marty, but too much in that she feels so guilty about it that she stays in an abusive situation because she feels like she owes him. And because she knows how crazy he is about her.

That is what makes the film so powerful, in my opinion, the nuance the actors bring. Marty is primarily an abusive hood (and largely unsympathetic), but he has human emotions and is nuts about Ruth, so much so that he hardly understands it. Ruth, on the other hand, is not merely a victim, but consciously working her way to the top and is willing to roll over (or have Marty roll over) quite a few people to get where she wants (including discarding the man she loves and who loves her).

The music is also sensational (one of my favorite soundtracks). Most of the songs were popularized and associated with Ruth Etting, such as “Love Me or Leave Me” (Walter Donaldson and Gus Kahn) and “Ten Cents a Dance” (Rodgers and Hart). A few songs, like “I’ll Never Stop Loving You” were written for the movie.

Doris Day doesn’t sound a thing like Ruth Etting and she’s still more fifties than twenties – in fact the entire more looks more like a twenties flavored fifties film, but that’s not a complaint. I’m not sure the twenties look would have flattered Day nearly as well as the fifties, anyway. Ruth Etting actually wanted Jane Powell to portray her in the film, but Cagney lobbied for Day, for which I am extremely grateful. Doris Day’s incandescent talent (nothing against Powell) makes her success and Marty’s surprise at her success all the more potent, because she really is stunning. How could she not become a star?

Here is Doris Day’s rendition of “Love Me or Leave Me.”

And Ruth Ettings rendition, recorded in 1929. Ruth Etting always claimed that her voice was deeper than it sounded on recordings.

And Ruth Etting’s version of “Ten Cents a Dance.”

Posted by christinawehner on May 12, 2016 in Movies