Dorothy Lamour and the History of the Sarong Around the World 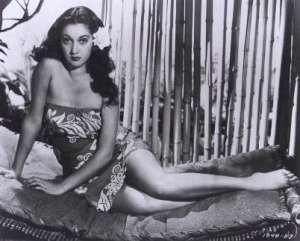 Apart from being remembered for accompanying Bob Hope and Bing Crosby on the road so often, Dorothy Lamour has been immortalized as “The Sarong Girl.” She made her debut in The Jungle Princess in 1936, playing a Malaysian native wearing an Edith Head designed sarong. The sarong was to become an inescapable part of her persona; which she humorously poked fun at repeatedly in the Road movies.

Ultimately, she only wore a sarong in “about six” movies (perhaps most famously in John Ford’s The Hurricane), but she never really did get away from her image as an exotic native, draped in clothe, at home on the beach, perhaps swimming in the ocean or singing a song.

In America, the sarong has ever since been associated with swimwear, often as a wrap or even (like in the case of Lamour) a short dress. However, the sarong actually has a long and varied history around the world

Though I used to associated the sarong with South Sea islands, the term “sarong” comes from Malaysia, and the sarong itself (known by a variety of names around the world) is believed to have originated in Yemen (called a futah). Its use has expanded around the world, originally through Arab traders during the 1300s. The sarong is still commonly worn in Indonesia and in the Arab peninsula. It’s use can vary by location, from religious observation (the sarong is especially identified with Islamic culture), ceremonial use, daily life, comfort, and national and cultural identity. In some places, only men wear the sarong, in others, women and children wear sarongs, too. 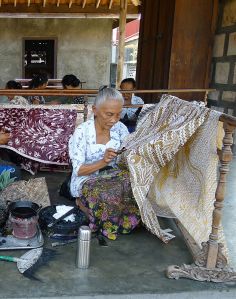 The colors and patterns of the sarong can also vary greatly. Some are plain, some checked, some with geometric shapes, and others with floral patterns. In Indonesia (especially Java), they color the fabric using the batik method. Patterns are created by applying wax to the fabric in the desired shapes, then the fabric is dipped in dye, after which the wax is removed.

The shape of the sarong is described as being like a tube (sarong means “scabbard” in Indonesian) and you step into the sarong before pulling it tightly and securing it at your waist. For women, the sarong can also be worn not just at the waist, but also up to the armpits. There are also, evidently, many other uses for the sarong – such as a blanket, headgear and even as a knapsack.

I confess, I had no idea the sarong was so ubiquitous, multi-purposed and traditional. It shows, as Phyllis Loves Classic Movies also showed in her post on “Costume Dramas of Golden Hollywood,” that Hollywood is all about flavor. They derive inspiration from around the world (or from novels) and distill it down into a specific flavor. Sometimes it’s artificial flavoring and sometimes it’s natural flavoring.

I will admit, however, that I’ve always had an affection for Dorothy Lamour’s films. Perhaps it’s the good humor in which she approached all her work – whether comedy or South Sea romance. Or perhaps it’s her voice and songs. She seems, somehow, unaffected, even though she’s not what one would consider a natural actress. Always gracious, somehow.

In closing, here is Dorothy Lamour singing the song that would become most associated with her: “The Moon of Manakoora.”

And a video on the many ways to wear a sarong in Indonesia.

This post was written as part of “The Characters in Costume Blogfest,” which I am honored to be co-hosting with Andrea of Into the Writer Lea! Click here for more marvelous posts from Days 1, 2, and 3. 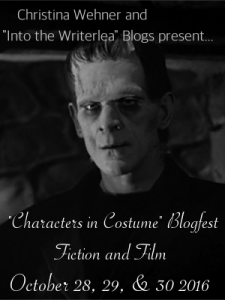 Posted by christinawehner on October 29, 2016 in Movies