The Desolation of Smaug and The Tolkien Professor 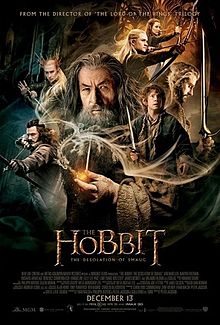 I finally made myself watch The Hobbit: The Desolation of Smaug. I don’t quite know what to say. I’m not a Peter Jackson fan, so there doesn’t feel like there’s a lot for me to write that isn’t mere opinion.

I don’t think there’s any denying that the movies have been turned into an epic instead of the concise and tightly focused children’s book.

According to The Tolkien Professor, Tolkien himself regretted writing the The Hobbit as a children’s story. After he’d written LOTR, he wanted to more fully integrate the book into his trilogy and set about rewriting it. The result, apparently, was not nearly as amusing or even as good. But then, I think if you look at The Hobbit, The Lord of the Rings and The Silmarillion, there is a definite trend away from humor and into taking his works more seriously. According to The Tolkien Professor, in his Tolkien Chats: “Reactions to the Desolation of Smaug – Part 1” he believes that Peter Jackson’s Hobbit films are attempting to make the movies more in accordance with Tolkien’s later vision.

The real casualty of turning The Hobbit into an epic is Bilbo’s journey. Corey Olsen (The Tolkien Professor) wrote a marvelous book called Exploring J.R.R. Tolkien’s The Hobbit and discusses in detail the journey that he takes, how he changes and how he remains fundamentally the same; he becomes, essentially, more fully himself.

In the movies, especially this second one, the focus is much more on how he changes in relation to the ring. His main function in the film is to wield that ring and telegraph it’s importance in both future and past events. And it’s not that it isn’t valid for Jackson to show how the ring is changing Bilbo, but sometimes it feels like too much. We all know it’s changing him, most people have seen exactly how it changed him in the LOTR films. We don’t need to have it constantly pushed in our face.

It’s that kind of telegraphing that annoys me so much about Jackson’s Tolkien films. Everything is portentous. People don’t speak, they pronounce important bits if information or history or vague and picturesque warnings. Jackson seems to want to keep us in perpetual suspense, even though we all know how it’s going to turn out.

I might be picky about suspense because I do like a good Alfred Hitchcock film and he understood suspense. But Jackson likes to keep his movies in a cycle of little emotional moments. But because I know what’s coming, all they serve is to annoy me.

Did we really need a great moment of despair before they discovered the hidden door in the mountainside, with the dwarves tramping off dejectedly? And then a little surge of emotion as Thorin comes back and they enter the mines? It’s herky-jerky.Then there’s the moment when Balin remarks on how surprising hobbits are (in case we missed similar reflections in nearly every other film). There’s the moment when Bilbo turns up with the keys to get the dwarves out of the elvish prison with a surge of hopeful music. Kili nearly dies of an orc arrow, though I doubt anybody was really in doubt about his chance of survival.

And there’s probably ten different moments when somebody nearly gets killed by an orc only to be saved at the last moment by somebody else (usually Tauriel). And there is always appropriate and highly noticeable music to help us along on our emotional journey.

Perhaps I am being unfair in this assessment, but this is one of my big pet peeves about Peter Jackson. My sister calls it too many climaxes in the course of one film. His films don’t build steadily to a conclusion, they are a serious of hills; we bump our way to a conclusion.

In all fairness, I was highly impressed with the scene between Smaug and Bilbo…and I loved Smaug’s voice (why do villains always get to be played by the actors with the coolest voices?). That was definitely the highlight of the film and the conclusion that it should have been building to more steadily so audience members don’t get alternately annoyed or bored while they are watching.

Of course, so far, my sister and I are the only people who have expressed a feeling of frustration at Jackson’s emotional herky-jerkiness. We could be biased because we normally prefer a different kind of film. What do you think? Did it annoy you or did you feel it added to the film?

If you are at all a fan of Tolkien and all his works, I would definitely recommend looking up The Tolkien Professor. I would also heartily recommend his many online discussions about Tolkien, the books, the movies, and even other works by Medieval authors.

Posted by christinawehner on May 24, 2014 in Fantasy

2 responses to “The Desolation of Smaug and The Tolkien Professor”